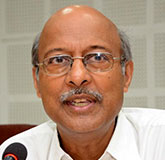 Rajeev Sangal is the Director of the Indian Institute of Tech-nology (BHU), Varanasi. He holds a BTech in Electrical Engineering from IIT Kanpur, and MS and PhD in Computer and Information Science from the University of Pennsylvania. He is the founder-head of Language Technologies Research Centre, at IIIT-H the largest academic centre for computational linguistics (CL) research in this region of the world.
He along with Dr Vineet Chaitanya has developed Computational Paninian Grammar framework which is linguistically elegant and computationally efficient.He designed and helped make human values course a regular part of the academic curriculum at IIIT-H in 2005. The course has spread to several large universities in India, where it has been adopted, and has started running in 2000 colleges. Several thousands of teachers have been trained as a part of the training program on Human Values. He is the co-author of a book on Human Values which is being used widely.