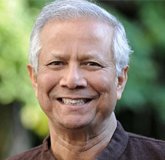 Nobel Laureate Professor Muhammad Yunus is a social entrepreneur, banker, economist and civil society leader who founded the Grameen Bank, and about 50 other enterprises in Bangladesh. He is also credited with pioneering the concepts of microcredit and microfinance. Today, Grameen Bank has over 8.4 million members—97 per cent of who are female—and has lent over US$12.5 billion since its inception. Fortune Magazine named Yunus in March 2012 as "one of the greatest entrepreneurs of our time".
In 2006, Professor Yunus and Grameen Bank were jointly awarded Nobel Peace Prize. He was chosen by Wharton School of Business as one of 'The 25 Most influential Business Persons of the Past 25 Years'. Born in 1940 in the seaport city of Chittagong, Professor Yunus studied at Dhaka University in Bangladesh, then received a Fulbright scholarship to study economics at Vanderbilt University. He received his Ph.D. in economics from Vanderbilt in 1969 and the following year became an assistant professor of economics at Middle Tennessee State University. Returning to Bangladesh, Yunus headed the Economics Department at Chittagong University.