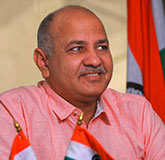 Manish Sisodia, Deputy Chief Minister of Delhi is a senior leader of the Aam Aadmi Party. He holds Education, Finance, Planning Land & Building, Vigilance, Services, Women and Child Development, Art, Culture and Languages and all other Departments not specifically allotted to any Minister. Sisodia has gained a reputation around the country as one of the best education administrators and educationists in government.
Sisodia was a journalist with Zee News and All India Radio , after which he was active in the struggle to pass the Right to Information Act and played a key role in laying the foundation of the Jan Lokpal Movement. He is one of the oldest associates of Arvind Kejriwal and worked with him to create awareness for and conduct Mohalla Sabhas in Delhi.
During his tenure as Education Minister, a significant transformation has been seen in the infrastructure and quality of education provided by Delhi government schools. As Finance Minister, Sisodia doubled the budgetary allocation to Education amounting to almost 25% of the entire budget of the state. This was a historic step and has since been followed by the launch of a full-fledged reform process in public education.