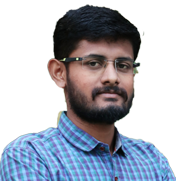 Pramod Bharati Shrikant Hukkeri hails from Raibag and holds a Bachelor of Science degree from Rani Channamma University Belagavi has four years of involvement in LEAD during his graduation. In 2013 Pramod participated in the LEAD Leadership Program a 10 days residential camp focused on leadership training and attended LEAD Prayana in 2015 a tour of 14 days to unleash the leadership potential in oneself. Pramod was an active student leader in the program which resulted in promoting him as a Master Leader in 2013, Ambassador in 2014 and the Best LEAD Ambassador in 2015 in Chikodi. He was passionate about transforming the lives of the youth and so he started his Internship in LEAD and mentored more than 200 leaders to complete their leadership initiatives for the youth in his Campus and in the Raibag City. The zeal and joy in helping the youth grew much stronger in him so he continued to satisfy his passion and chose the career to develop the students by joining LEAD as a Program Associate in the year 2015, who was the first student to get placed from his batch at his college. Traveling, Exploring, Reading Books, are a few of his favorite activities along with his passion.