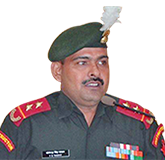 Yogendra Singh Yadav was born on 10 May 1980 in Aurangabad Ahir village of Sikandrabad, Bulandshahr District, Uttar Pradesh. His father Karan Singh Yadav had served in the Kumaon Regiment, participating in the 1965 and 1971 Indo-Pakistan wars. Yadav joined Indian Army at a very young age of 16 years and 5 months. Grenadier Yogender Singh Yadav was part of the leading team of a Ghatak Platoon tasked to capture Tiger Hill on the night of 3/4 July 1999. Grenadier Yogender Singh Yadav, unmindful of the danger involved, volunteered to lead and fix the rope for his team to climb up. On seeing the team, the enemy opened intense automatic, grenade, rocket and artillery fire killing the Commander and two of his colleagues and the platoon was stalled. Realising the gravity of the situation, Grenadier Yogender Singh Yadav crawled up to the enemy position to silence it and in the process sustained multiple bullet injuries. Unmindful of his injuries and in a hail of enemy bullets, Grenadier Yogender Singh Yadav continued climbing towards the enemy positions, lobbed grenades, continued firing from his weapons and killed four enemy soldiers in close combat and silenced the automatic fire. Despite multiple bullet injuries, he refused to be evacuated and continued the charge. Inspired by his gallant act, the platoon charged on the other positions with renewed punch and captured Tiger Hill Top.