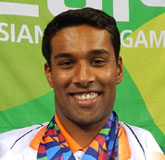 Sharath Gayakwad is an Indian Paralympic swimmer from Bangalore. At the 2014 Asian Games, he broke P.T. Usha's record for most number of medals by an Indian at any multi-discipline event by winning 6 medals. Coming from a modest financial background, he has over 30 international and 40 national medals to his credit, one of them being the bronze medal at the 2010 Asian Para Games.
He is the first Indian swimmer to qualify for the Paralympics and competed in the 2012 Summer Paralympics in London. Sharath has been receiving both monetary and non-monetary support from the GoSports Foundation, Bangalore since 2011.