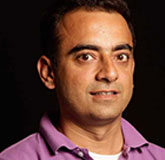 Neeraj Kakkar is a model innovator and determined entrepreneur who celebrates traditional Indian culture. Mr. Kakkar worked as the General Manager for Hindustan Coca-Cola Beverages. He wanted to harness his full business potential and received his second MBA in General Management from The Wharton School of Business.
In 2009, he co-founded Hector Beverages and Paper Boat which brings traditional Indian beverages to the modern retail world. Mr. Kakkar is the CEO of Hector Beverages and works hard to create awareness of India's ethnic products. Paper Boat celebrates Indian culture instead of just replicating the West. Paper Boat drinks are now sold as beverage options on flight and trains, and in retail stores in several key metro cities and towns.