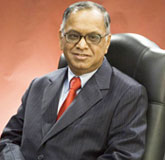 Narayana Murthy is the Founder of Infosys, a global software consulting company headquartered in Bangalore. He served as the CEO of Infosys from 1981 to 2002, the Chairman and Chief Mentor during from 1981 to 2011, and the Chairman Emeritus from August 2011 to May 2013.
He is listed as one among the 12 greatest entrepreneurs of our time by Forbes Magazine and was also ranked 13th among CNBC’s Global Business Leaders who have made maximum impact during last 25 years. Through his Infosys Foundation, he supports education, healthcare, and rural development across India.