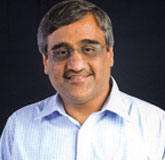 Kishore Biyani is the Founder and CEO of Future Group and also the Founder of retail businesses such as Pantaloon Retail and Big Bazaar. Mr. Biyani says he uses his gut instinct and observation to make decisions for his businesses. By 2009, he was running the largest retailer in the country and was named as retailer of the year by the National Retail Federation.
Today, the Future Group has more than 70 Million sq. ft. of retail space in 90 cities and 60 rural locations. With Dipayan Baishya, Biyani co-authored the book It happened in India: The Story of Pantaloons, Big Bazaar, Central and The Great Indian Consumer. As of 2007, it was the best-selling business book ever published in India, with sales of over 100,000.