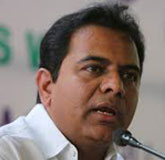 Kalvakuntla Taraka Rama Rao, popularly known as K.T.R., initiates development that is people centric. After completing his MBA, Mr. K.T.R. worked as an IT Professional for six years - from 2001 to 2006. He has been representing Sircilla Assembly Constituency since 2009. He holds portfolios of Information Technology, Industries and Commerce, Municipal Administration and Urban Development, Textiles and NRI Affairs.
He is currently the Minister for Information Technology for the Government of Telangana. As an IT Minister, his aim is to fulfill the multi-dimensional requirements of the IT industry. Several complementary initiatives have been launched under his leadership to address the needs of the industry. A couple of his noteworthy projects are T Hub, India's largest incubator for startups, and Water Grid, a project to provide tap water to about 8 million homes while installing optic fiber to create the most extensive broadband network in India.