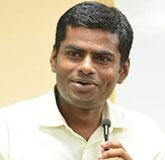 Annamalai is an ex Deputy Commissioner of Police and former IPS officer. He is a graduate of PSG College of Technology in Coimbatore and Indian Institute of Management, Lucknow. A 2011 batch IPS officer, Annamalai hails from Karur in Tamil Nadu. He was first posted as the Assistant Superintendent of Police, Karkala sub-division in Udupi district in 2013. He was later promoted to SP of Udupi on January 1 2015. Later, in 2018 he was promoted as a deputy commissioner of police in South Bengaluru. He is famously known as Karnataka's Singham. In May 2019, he voluntarily quit his police job to extend his public service. He featured in Tedx Talks and spoke about The Power Civil Momentum. He has proudly served nine years in his Khaki and has lived every moment with dignity along with his colleagues.