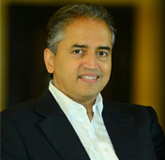 Devi Prasad Shetty is an Indian cardiac surgeon. He is chairman and Founder of Narayana Health, a chain of 21 medical centers in India. He has performed over 15,000 heart operations.Dr.Shetty is the first heart surgeon in India to perform neo-natal open-heart surgery, the first surgeon in India to use an artificial heart and many others.
In 2004 he was awarded the Padma Shri, the fourth highest civilian award followed by the Padma Bhushan in 2012, the third highest civilian award by the Government of India for his contribution to the field of affordable healthcare. Narayana Health is one of India's largest healthcare providers, with a network of hospitals and heart centers across India and an international hospital in the Cayman Islands, North America.