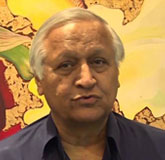 Sanjit "Bunker" Roy is an Indian social activist and educator who founded the Barefoot College. He was selected as one of Time 100's 100 most influential personalities in 2010 for his work in educating illiterate and semi literate rural Indians. Roy was awarded the Padma Shri by Giani Zail Singh in 1986.
Bunker is a founder of what is now called Barefoot College. After conducting a survey of water supplies in 100 drought prone areas, Roy established the Social Work and Research Centre in 1972. Its mission soon changed from a focus on water and irrigation to empowerment and sustainability. The programs focused on siting water pumps near villages and training the local population to maintain them without dependence on outside mechanics, providing training as paramedics for local medical treatment, and on solar power to decrease dependence and time spent on kerosene lighting.
He was recognised in 2010 in Time for the programs of the college which have trained more than 3 million people in skills including solar engineers, teachers, midwives, weavers, architects and doctors.